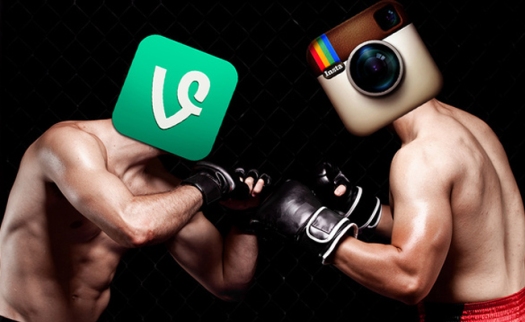 It’s my first Free Friday from work and I’m up early at Starbucks researching (i.e. nerding out to) the latest battle in the social media landscape between Vine and the new Instagram Video. In my eyes, these kind of digital duels are like boxing or pro wrestling, but only better – quite a statement given my affinity for WWE.

Yes, Instagram has introduced a 15-second video feature to complement its trademark filtered-photo sharing service, news my broworker Bobby rushed down to share with me at the office yesterday (see, I’m not the only one who’s amped about this development). I suppose this should come as no surprise to the world’s 130 million Instagram users and the 13 million of us on Vine; it was only a matter of time until Instagram introduced video.

Let’s not lose sight of the overarching significance here, though, because while this is seemingly a battle between Instagram Video and Vine, in all actuality it’s a larger war between Instagram’s parent company, Facebook, and Twitter, owner of Vine. Furthermore, in no way is this simply a competition for users, but a play for advertising dollars – two concepts that go hand in hand in the digital world nowadays.

When it comes to the advertising aspect, it’s no coincidence that Instagram went with 15 seconds given that it’s an increasingly popular length for TV and online ad spots. Companies can do a great deal in 15 seconds – and much more than in six seconds on Vine – as evidenced by Lululemon in this sweet Instagram Video. Here are a few other brands also wasting no time taking advantage of Instagram’s new video offerings.

Facebook was undoubtedly smart to embrace the bite-sized video-sharing side of the industry, thus stealing a key element of Twitter’s business model following the latter’s immense success with Vine. As an early adopter, it seems like Vine’s been around forever, but it’s important to note what many have called “video Instagram” was only just introduced in late January 2013.

Instagram CEO/co-founder Kevin Systrom billed his app’s new 15-second video feature as “everything we know and love about Instagram, but it moves.” In my quick research online and limited experience with the feature itself, here are a few notable comparisons between Instagram Video and Vine:

Some folks are already predicting the early extinction of Vine (hence the #RIPVine hashtag) after yesterday’s announcement, but this guy’s not so convinced. With Twitter behind it, I have little doubt that Vine will fight back – some of its most faithful users (hilariously) are already firing back.

and up its proven game. And let’s face it, a little healthy competition never hurt anyone and should only serve to benefit us users.

Lastly, if you want some extra help before taking a stab at your first Instagram Video, how about a little seven-step tutorial care of the great folks at Mashable?